Top 10 Most unique Women in the world that actually exist

We live in a world where aesthetics and looks matter more than what resides inside you. While our entire world is full of wonders, people are nothing less, to begin with. Today, we will be talking about the top 10 most unique women in the world that actually exists  The women in the list might give you chills with their bizarre looks or mesmerize you, but in the end, you are going to get startled. So, without any further due, let’s get started.

Top 10 most unique women in the world.

Valeria Luckyanova is a Russian beauty and looks exactly like Barbie Doll. Yes, you heard that right. Although according to Valeria, she only implanted her breasts, while the rest of the body is completely natural. In order to keep such a beautiful body in shape, she always goes through a heavy diet and workout.

Beshine is a European woman, and her breast is the largest breast in the world. The weight of one of her breasts is that of 42 pounds. So, yeah, even with a single look at her, you can be mesmerized and terrified at the same time. We can also imagine how her day to day life can be so much pathetic, just to move on with those huge giants. She is part of most unique women in the world.

Cathie is also an American woman, and she is named in the Guinness Book of World Record for the smallest waist in the world. Cathie has a height of 5.6 feet with her waist being just 38.1 centimeters wide.

Christine is from Las Vegas, United States. Christine’s nails are the longest in the world. Her left-hand nail is 10ft 2inch, i.e. 309.8cm and the right-hand nail being 9ft 7inch, i.e. 292.1cm. Together her nails have a length of 19ft 9inch. So, the next time you see her around, don’t forget to ask her about her dedication towards keeping such long nails. Christine Walton is part of the most unique women in the world.

Julia lives in the United States and is also known as the illustrated lady. This woman has tattoos all over her body, and the proof of that tattoo is 95% on the entire body. The Guinness Book of World Record has named Julia as the most tattooed woman in the world.

If you think that the list of bizarre has ended, then you are certainly wrong. Kim can remove the eyes from the eye socket upto12 millimeters. The farthest eyeball protrusion is given to her name in the world record. But frankly speaking, even having a single glimpse at her in such a state can really give you goosebumps. She deserves part of the most unique women in the world.

If a long-haired lady is your type, then certainly you will fall for Asha. Asha Mandela lives in Florida. This lady’s hair is 55 feet long, which has recorded her name in the Guinness world records. Asha Mandela feels very proud of her looks. She even calls herself Black Rapunzel.

Elisany is really the heartthrob for all the boys who love long girls. This Brazilian beauty has a height of 6.9 feet, and the most surprising thing is that her boyfriend is just 5 feet 4 inches. In a nutshell, if you want to go out with her, she is definitely going to stand out in public.

Well, the list won’t be completed unless a vampire is added to the list. Maria Jose Cristerna from Mexico always wanted to do something different with her body so, she transformed her entire body into a vampire. She has tattoos on her entire body. To give a more vampire look, she has sharpened her teeth and has done titanium cut surgery on her head. She has also done several other surgeries so that she can have that complete Dracula look. So, if you ever encounter her at night, don’t freak out, she is just a human only.

Watch the full video on the top 10 most unique women in the world. 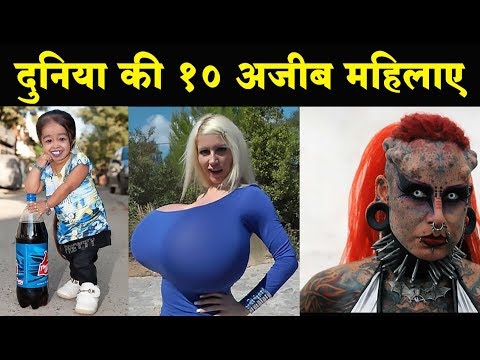